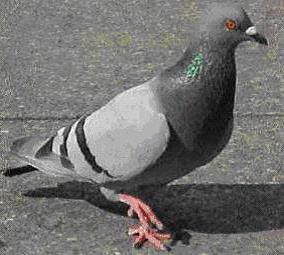 The feral pigeon is descended from domesticated strains of the rock dove and the wild breeding population is supplemented by racing pigeons and escapees from domestic pigeon lofts.

Feral pigeons build their nests in or on buildings and other structures, where they are usually found on ledges or in hollows, under eaves or on girders.
Some feral pigeons are capable of breeding throughout the year; however the peak occurs between March and July.

Much of the damage caused by pigeons arises from infestations of buildings and their fouling.

The acidity of their droppings may erode the surface of stonework, gutters and drains become blocked and pavements may be made unsafe because of the potential of slipping on droppings.

Feral pigeons should also be regarded as potential carriers of disease such as salmonella.

Proofing of roosting and potential nest sites is probably the most effective means of control.

Plastic spikes and netting fixed to suitable sites should deter roosting and nesting. Tendring District Council does not offer a service for the control of pigeons but if you require any further information please contact a Pest Control Company specialising in bird proofing and may be found in the local telephone book or on the internet.

Shooting or trapping can be effective, but to meet with legislation it is recommended that this is carried out by a professional.

Please refer to our guidance leaflet in the useful document section for further information.

We receive many enquiries each year about seagulls, especially during the mating season – this generally begins with the birds identifying nesting sites in February each year, with the actual breeding season running from March to the end of July with a typical clutch of three eggs laid in April/early May.

Urban gulls are protected by The Wildlife and Country Act and it is an offence to remove or harm their eggs or nests unless they are a serious risk to public health. Nuisance alone is not considered to be a reasonable justification for culling.

Tendring District Council’s strategy for dealing with issues relating to seagulls and pigeons is to concentrate on their food sources. Our staff have the power to issue fixed penalty fines to businesses that litter the streets with commercial food waste. We also ensure that businesses have adequate waste storage facilities, but should you notice an inadequate storage facility please contact the Street Scene Office on 01255 686 764. Our staff encourage residents to increase recycling by removing food waste from the refuse sacks, participating in the weekly kerbside food waste collection scheme using the gull proof food caddies.

Additionally and in conjunction with the Clacton Town Partnership, reusable seagull proof bags have been piloted in the Clacton Town centre area, which protect the refuse bags from attack by the scavenging gulls before their collection by the refuse contractor.

The number of gulls breeding on rooftops in the UK is increasing by 30% a year, with the most aggressive behaviour being seen between the months of July and August. Not only can gulls be extremely noisy, there are also an increasing number of reports of these birds attacking people or pets for food, and when protecting their young.

Gulls will pick at roofing materials in order to build their large nests. The nests themselves may be in a position to block gutters, vents and chimneys, and are likely to hold moisture against the structure of the building. Not only a nuisance, gulls can present health issues as they often pick-up and transmit E.Coli and other harmful organisms to humans through contact with their droppings.

If seagulls or pigeons are causing a nuisance, then it is the responsibility of the homeowner or occupier to ensure that the property has proofing. The most effective methods are netting and spikes. Private pest control companies that specialise in bird proofing can be found within the Yellow Pages or on the internet.

Please refer to our guidance leaflets in the useful document section for further information.