A youth theatre company from Clacton is preparing to tread the boards in a German theatre as part of an international link up.

The Princes Youth Theatre (PYT) hosted the ‘Juks’ youth theatre group from Biberach – Clacton’s twin town – in April this year to begin rehearsals ahead of a joint performance of Godspell in the Princes Theatre last month.

Now the PYT company is paying a return visit to take to the stage with their German counterparts once again with a further three performances.

The special performances are taking place as part of celebrations of the 50th anniversary of the twinning of Clacton and Biberach.

While much of the project cost has been paid for by the young actors through fundraising activities, Tendring District Council (TDC), which runs the Princes Theatre, has supported the initiative with £5,000.

Alex Porter, TDC Cabinet Member for Leisure and Tourism, said: “The partnership provides immense confidence and cultural gains, as well as a great travel experience outside the UK.

“The visits and performances are exceptionally well received in Biberach by the local people and the young people attending form lasting friendships and embrace new cultures and traditions.” 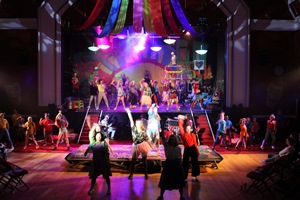 Melissa Wenn, who runs PYT, added: “This is a really fantastic partnership, which is good for the young people not only in terms of their theatre careers but also to broaden their horizons.

“It also gives them the opportunity to perform in a different theatre setting and engage with a whole new audience.

“That is why we have been running projects with the twin towns of Biberach, and Valance, over the past 22 years.”