Members of the public are invited to join in a parade and service marking Remembrance Sunday in Clacton.

The annual Remembrance Parade will begin from Clacton Town Hall at 10.25am on Sunday, 10 November.

Led by the Colchester Scout Band, dignitaries will take a salute before the procession goes through the Town Square and down to the seafront war memorial. 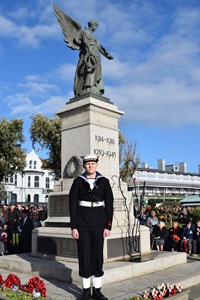 A service, beginning just before 11am, will be led by Reverend David Lower, with hymns accompanied by the Salvation Army Band, and a silence.

Services will also take place at the Clacton War Memorial and outside Clacton Town Hall shortly before 11am on Monday, 11 November – Armistice Day.

“We must remember those who have given their lives in conflicts,” Councillor Land said.

“Each year the people of Tendring turn out in numbers to observe the parade and join the Remembrance Service, and I hope that this year is no exception.

“By coming together and observing this act of remembrance we draw upon our history, in the hope of not repeating the conflict experienced then in our future.”

Poppy sales by the Royal British Legion are underway, and are being sold right up until November 9 at various locations around the district, including a Poppy Shop opposite QD in Rosemary Road, Clacton.