Members of the Armed Forces and the emergency services were celebrated with a special event held in Clacton.

The Tendring Veterans and Emergency Services Day, held on Sunday (7 August) saw hundreds of people come along to pay their respects and learn more about the organisations involved.

A service was held at Clacton War Memorial to kick-start the day, which included a two-minute silence, the laying of wreaths and the National Anthem, and which was attended by standard bearers, a number of veterans, the RNLI and local Sea Cadets.

Afterwards those taking part were led in a procession by a piper down to Clacton Greensward for the main event, which included entertainment and stalls from armed forces, support charities, emergency services, the RNLI and others. 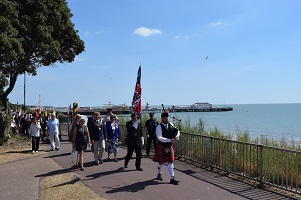 People could see what life was like in the trenches of the First World War, see a policeman in an old uniform and with vintage police bike, and some classic military vehicles.

Peter Harris, Tendring District Council (TDC) Chairman and whose idea the event was, said he hoped the day was enjoyed by all who attended.

“For my term of office I am supporting the RNLI and charities which help veterans – and this event was a way of not only hopefully raising some money for them, but also an opportunity for us all to show our support for the amazing work these organisations do,” Councillor Harris said.

“It was incredible to see so many veterans and standards standing proudly at the service, and I was really pleased by the turnout too.

“Perhaps most touching was to have three surviving veterans from the Second World War, along with the Queens’ representative, and I hope they felt our thanks through the event.”